On the Porch in the Seventh Ward 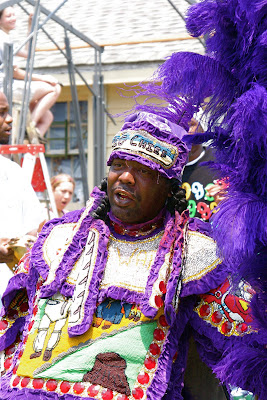 I lifted this article by my husband, Billy from The Nation's website ( I added the pictures).

To be honest, I quit this blog two weeks ago.

I am just not getting to the computer enough these days to commit and well, I wasn't sure that anybody was actually looking anymore (due to my own spotty posting, of course).

Then I was at the Big Easy Roller Girls bout last Saturday, walking back to my viewing spot fresh from a receiving a pleasantly loud and good earful of the Bruisers,

The Bruisers, by David Olivier
(click his name. Durn picture won't post)
when one of the derby girls skated by, screeched to a halt and said, " Are you Nikki?"

I don't know how she recognized me, but she did- from my blog. She told me that she understood about my Little Edie Halloween costume (which meant a bunch to me, really) and that she looks at my dog posts. I was totally shocked by the exchange and kind of flattered. It is weird that people "know" me but have never met me. I am sure other bloggers have experienced this.

Well thank you, Sophie Nuke 'Em!
(picture from Roller Girls website)
Then a started t receive complaints from others about the eternal hot dog in the water post....

So alright, I will continue...if not everyday, at least a few times a week until my to-do list shrinks up.

I have actually been taking photos and will now post an installation of some from my experience at The Porch's (no website!) 7th Ward Fest last weekend, where I got super close to a bunch of Mardi Gras Indians. But first, an article by my husband on the subject.
Posted by NolaNik at 12:06 PM 6 comments: