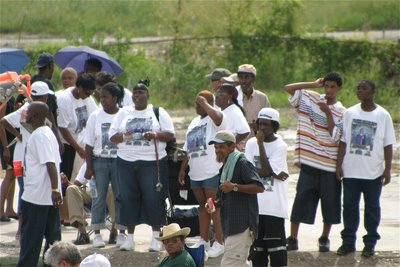 When people get shot or otherwise murdered in NOLA, it is a relatively new tradition (as in other places) to memorialize the dead on T-shirts. At the anniversary, there were TONS and TONS of people wearing these to commerate the death of those loved ones who died due to the storm or events that occured as a result of it.

Please look for them in future anniversary photos.

And FYI, if you click on the pictures, they get huge.
Posted by NolaNik at 8:50 AM No comments: