Ways to Give this Season and Have a Blast While Doing It! Part One: The Pussyfooters Blush Ball

This is the first in a series of posts about women's groups that march during Mardi Gras season. Many groups that march during Mardi Gras raise money during special events to help different organizations in the city of New Orleans and these events take place between now and Mardi Gras, hence the timing of the series. This first segment will be about The Pussyfooters -the history of the group and more importantly their annual fundraiser, The Blush Ball, which takes place in order to raise money to benefit The Metropolitan Center for Women and Children while throwing one hell of a party to do so!

Last year, I was invited to join a group of women who call themselves The Pussyfooters. I knew them as a fantastic group of confident dancing gals who marched in Muses but quickly learned that they are much more. The ladies (all of whom are above the age of thirty, a prerequisite for joining) dress in pink, sherbet orange and white and take to the streets to march or dance freestyle during a number of events throughout the year. There are close to eighty women in the group now, though you will see the greatest number of members march during Muses as some live in other places now or split time between different cities. 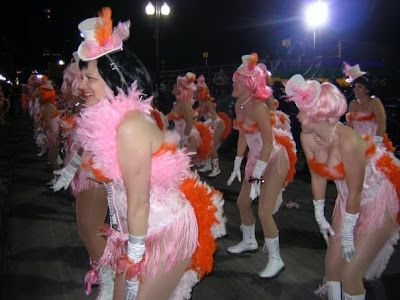 Small groups of ladies pop up at events all over the city from August until Muses. Last year the Pussyfooters made appearances at the Midsummer Mardi Gras, The Halloween Parade, The Lazarus Halloween Ball, Prospect Everyone, The Blush Ball, and The Lyons Club just to name a few events! We do not always wear the official costume of the year, but often dress "free style" where the only dress requirement is to wear Pussyfooter colors. It is during these events where you will see individual characters shine through. 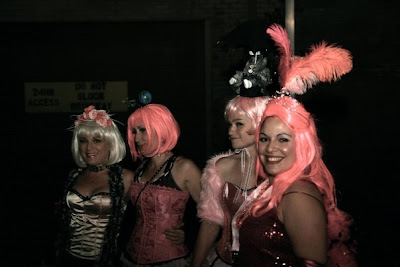 At Prospect Everyone, 2008, above and
dancing in "loose formation" at The Lyons Club March, below 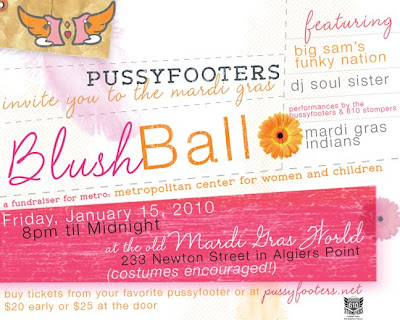 THE HISTORY & PURPOSE OF THE PUSSYFOOTERS
I interviewed one of the founding members of the group, Camille Baldassar to get some answers about how the group started and what we stand for. First and foremost, it is said that

PUSSYFOOTERS ARE ON THIS EARTH TO RAISE THE CONSCIOUSNESS OF ALL WOMEN EVERYWHERE. SISTERS FROM THE MOTHERSHIP WORK TO SUPPORT AND EMPOWER WOMEN GLOBALLY AND LOCALLY. WE HONOR OUR IMPERFECTIONS AND DANCE OUT OF LOVE AND NON-JUDGEMENT. WE ARE- EACH AND EVERYONE OF US-SHINY DIAMONDS.


Who are The Pussyfooters?
Majorettes from the Mothership sent here to help the party people get their groove on.

Can you talk about your inspiration for founding the Pussyfooters?
I was watching one of my first Mardi Gras parades and fell in love with the gals who dance in the high school troupes. I was about 37 years old and thought, "I want to do that!" I began asking around, and with the help of a few core women we called a meeting, held practices, contacted Muses, made costumes and the Pussyfooters were born.
Why the name Pussyfooters?
Someone just thought it up in the early stages of brainstorming, and as soon as we heard it we knew it was the right one. We love the double entendre twist. One of the definitions of Pussyfoot means to sneak behind the scenes-do things your own way. There's a little subversive nature to who we are as well.
How did the grow to be so large? There are close to eighty members now!
People love what we do as much as we do. We are proud to be one of the, now, many women's parade groups that fit naturally into the NOLA groove.

Note: Each woman is invited to join and is sponsored by another established Pussyfooter. Only one woman may be sponsored by a member, and membership does not expand every year.

How did the handlers come about?
The first year we knew enough to invite our male friends to march with us and help out. The first parade they just jumped in and helped with crowd control, the music system, and kept us hydrated. We couldn't do this without them.

What does the group do to help empower women?
What we see is that Pussyfooting (organizing together, costuming, and performance) creates individual and group growth, self-confidence, and self respect via performance. We are all amateur dancers, yet still get out there and strut our joy for everyone.
Since our first year we have done fundraising for Women for Women International. Additionally we have supported: Lindy's Place, The Holy Cross Neighborhood Organization and Metro Women's center.

What is the vision for the future of the group?
We hope to expand our service mission, and are in the process of applying for Non-profit status. We are working to nurture more depth in our values of Love, non-judgement, respect, and service within our own organizational culture.