I finally got the rest of the post-Katrina New Orleans Black Men of Labor second line pictures up on flickr, but you have to go here to see them in the correct order. I still haven't figured out a few things, obviously. Big thank you to David, AGAIN.
Posted by NolaNik at 1:10 PM 2 comments: 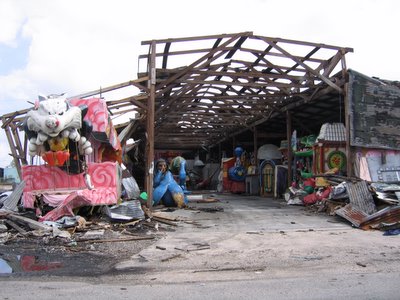 In New Orleans, after the carnival revelers have been ashed, the scene keeps on, but under wraps. I was once offered a top-secret position painting Mardi Gras floats for the next season. The warehouse workshops for these floats are all over the place in NOLA, hidden from view. Everyone knows this, but forgets, really as the year floats by. Well I found one, thanks to the winds of Katrina, and you'll have to figure out where it is yourself, though there are many visual clues.

The Mardi Gras will go on, and I cannot wait for my favorites: Muses (an all women's parade -on THURSDAY this year, not Wednesday), Endymion and St. Ann' s rag tag parade made up of revelers that is timed to clash with Rex (if you are costumed, you're in). I live one block from St. Charles, the main parade route and when I hear the marching bands a-blarin' I dash out the door just for them, because more than anything, I love the bands with the dancing girls with shiny, glittery, clickity-clackity boots.

Mr. Hardy has put out his Mardi Gras book, a great sign of post-Katrina normalcy, and this is the 150th anniversary carnival so it will be a good time to pick it up. This is not a promotion on purpose, I just want to get it in my hands to feel proof of it all, that it's really going to happen, that I can thumb through the schedule....

and then, of course, the Mardi Gras Indians! 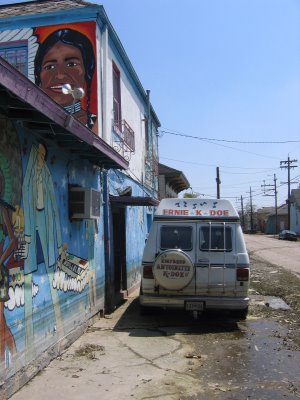 In response to Ms. NOLA, who pointed out that I left out Cubans,

You betcha! And to throw in some support for a local Cuban business owner (Bridge Lounge): she wants to start up a program where spanish speakers volunteer as advocates for Mexican workers who are getting beat up and robbed after work. When the ambulance comes, they cannot communicate. If you know any spanish speakers willing to advocate, send 'em to Jane and tell them Nikki (the art teacher) sent them.
Posted by NolaNik at 10:22 AM 2 comments: