Ethan Brown's "Shake the Devil Off" to be released Sept 1, 2009; Author to be on Political Panel at Rising Tide Conference 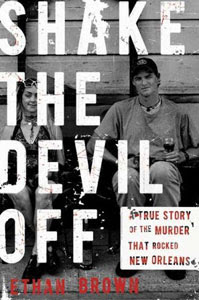 In his latest work, Shake the Devil Off, local author Ethan Brown investigates the circumstances behind the post-Katrina murder that shocked New Orleans.
Ethan explains his book as follows:

Shake the Devil Off chronicles the life of Zackery Bowen, an Iraq war veteran who murdered his girlfriend and then killed himself in New Orleans in 2006. (The project is) an exploration into what led a soldier to commit a horrific crime. There's an epidemic of suicides--and even homicides--in the Army now and my book is an effort to try and figure out what's driving this mental health crisis, the worst in the Army's history.

"Drawing the parallel between Katrina's aftermath and Bowen's unraveling psyche, Brown creates a riveting portrait of a gruesome crime while detailing the heart of a city in distress. A grim murder-suicide story delivered with skill and verve."—Kirkus

"Ethan Brown examines a notorious murder case, rescues it from the talons of tabloid journalists, and comes up with something much more than a true crime book. Shake the Devil Off is a gripping suspense story, an indictment of the military’s treatment of our soldiers in and out of war, and a celebration of the resilience and worth of a great American city."—George Pelecanos, New York Times bestselling author of The Turnaround and Hell to Pay

"Ethan Brown establishes himself as a prodigious reporter and masterful storyteller in Shake the Devil Off, a chilling portrait of a broken hero failed by the system."—Evan Wright, author of the New York Times bestseller Generation Kill

"A ‘coming home’ story that rivals any written about veterans of the war in Iraq, and a true crime account that raises the bar for the genre. Measured, thoroughly reported, and written with true empathy."—Nate Blakeslee, author of Tulia

"Looking more deeply at that from which the rest of us turned in horror, Ethan Brown has transformed an ugly and disturbing shard of the post-Katrina anguish. In this book, that which was lurid and sensational becomes, chapter by chapter, something genuinely sad and reflective, something that now has true meaning for New Orleans and for all of us."—David Simon, author of Homicide and The Corner

Posted by NolaNik at 2:58 PM No comments: