Below is the poster that Billy and I made for Neal's memorial. Below the poster are the words that Billy Sothern said for Neal at the service. 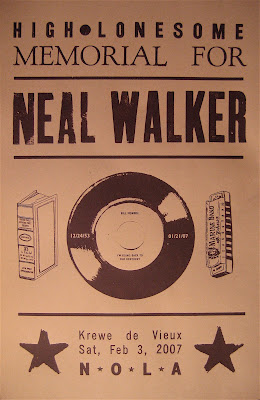 printed by the lovely folks at
Hot Iron Press

When I got the call telling me that Neal Walker, my friend, colleague, boss, and role model, had died, I went into the next room over to look at a photograph on the wall of my wife and I dancing while Neal loomed slightly out of focus in the background, tall and gray, with his hands to his mouth playing the harmonica. And staring at the picture, with the sound of his music in my mind, I thought to myself about how Neal had helped turn me into lawyer, with advise on matters big – like how to construct an argument concerning the right to self representation or how to make your clients life jump out from the page – to small – like exactly how he expected an ellipses to appear or that there must be two spaces after a period.

And that was Neal, an amazing human being who could with equal dexterity argue with great precision before the United States Supreme Court, convince a deep south jury that his client was real person and should get a life sentence, and play a blues harmonica solo with some of the best bands in New Orleans.

Last week, many of Neal’s friends met at his house on Royal Street just to be among each other and around Neal. Until I reached his house, I had been sort of numb to his death. But as I poked around his things, the small box of old 78’s on the floor, the German poster of concrete architectural gems, the books – Graham Greene, Thomas Pynchon, James Lee Burke, Peter Mattheison, arranged in neat order on the bookcases, the small stack of Bob Dylan cd’s, I began to a sense of the enormity of what we had lost because I started to hear Neal’s voice in my head spinning a yarn about the old days when he and his friends used to argue the finer points of Mao vs. Trotsky. How he was a friend of an earlier pioneer of poured concrete architecture, an old Maoist, or perhaps Trotskyite character. How Bob Dylan was a good songwriter but a lousy harmonica player. A million stories, each of which could have gone for ever, all well told. All gone, except in our memories.

For me, part of being around all of Neal’s things made me appreciate how much I admired him. I met him for the first time as an intern at the Louisiana Capital Assistance Center when I was twenty two years old and he was cranky, distant, intensely intelligent, and I thought, incredibly cool. Since then, I learned from Neal – sure many things about the law – but importantly about life and art and music. Without Neal, how many fewer people in the world would love Alan Lomax’s field recordings of prison music from Parchman farm. How many fewer would have heard the street music of Kinsasha, amplified with transistors and other things they had found in the junk, Neal told me with excitement, or the James Brown-esque R and B of Ethiopia. This is all to say, how much narrower and smaller would our lives have been without his influence. How much different would my life be if I hadn’t learned to affect certain Neal-isms. Haven’t we all tried to be just a little bit more like him. He was just so cool.

At Neal’s home that night, I put some old music from Neal’s vast collection of vinyl, organized alphabetically and by genre, and then a threw on a Bob Dylan album that Neal had introduced me to a few years earlier called Good as I Been to You. A few minutes later, Froggy Went A Courtin’, a classic song, several centuries old, that found its way to this country through Scotch Irish folks who came to towns in Kentucky near where Neal grew up. The song is about Froggy, who falls in love with Ms. Mousey, and asks her Uncle Rat permission for her hand after being told, “"Without my uncle Rat's consent. I wouldn't marry the president, Uh-huh.” Froggy and Ms. Mousey had an amazing wedding. The flying moth came, the june bug came, the big snake ate the wedding cake. It was a party Neal would have like. It was the kind of party he was planning to have with his fiancé Anna in the coming months.

Neal was part of the American musical and storytelling tradition that this song came from, a tradition called “high lonesome” by the folk musician John Cohen when he went down and recorded Roscoe Holcomb in Daisy, Kentucky in 1961, when Neal was eight. As I understand it, and I am sure that Neal could do a better job explaining, high lonesome is a blues that’s battered and sad but still innocent, like that of a hurt child. But the high lonesome singer or story teller, in fact, is wise on the blues and unsurprised at the pain of the world. He knows and possesses these blues. They don’t possess him.

In some ways, I think that this high lonesome tradition brings the different parts of Neal, the musician, the amazing lawyer together. Neal was a storyteller wherever he was, the Supreme Court, Winn Parish Courthouse, on stage with his harmonica. He used these skills to fight two of the darkest black eyes of American democracy, the death penalty and the woeful treatment of human being following Hurricane Katrina, and he used these skills to play songs and tell stories that made our lives richer.

Like many of the songs that Neal like, Little Froggy didn’t end happily, because as Neal knew, life is sweet, though hard.