I have decided to share. I realized that I have been greatly comforted by those bloggers who have put very personal feelings out there; I refer specifically to those feelings that are a result of the storm. So much time has passed, it seems unnatural to still be grieving. So I am going to share how I am feeling; below is a small illustration of my everyday life as one is incredibly lucky to have been, materially, relatively uneffected by this storm.

I have been remiss in my posting duties (really, since late summer). I chalk it up to a serious case of what I call the Post-K doldrums, which seem to hit at unexpected times, and (strange to me) with huge gaps presenting between jags. And damn it, it has been so long -and I think these bouts will continue to hit for as long as this backward-ass government chooses.

It hits as a feeling of exasperation, and of being overcome by a type of block (for me, blog-block, among other things). And oh, the empathetic sadness.

This feeling is best illustrated by the pursing of the lips while expelling (with great, but controlled force) a long stream of air from the (tight with anxiety)lungs. A pfffbd sigh.

It hits, for example, when I open the paper. I know it's bad because I am avoiding it lately. Or at election time -I don't know how overcome I am until the flabbergasted sigh hits (like when I am pressing the poll booth buttons -I feel like a monkey in an observation booth with a fake poll panel The audience says, oh look, she's democrat. Oh look, the monkey votes for women. Isn't that nice? Then they move on).

Or, as I travel around with my husband, taking photos for his book about the storm. I've met people who, right now, as we speak, are sleeping in tents inside flooded homes in the ninth ward -and it is frickin' cold out now. I am thinking of Albert right now, who I met this summer: 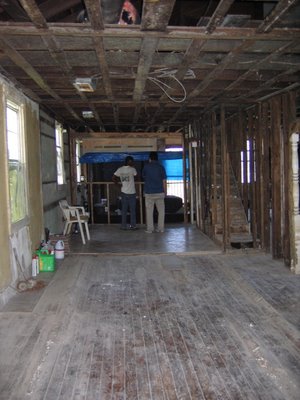 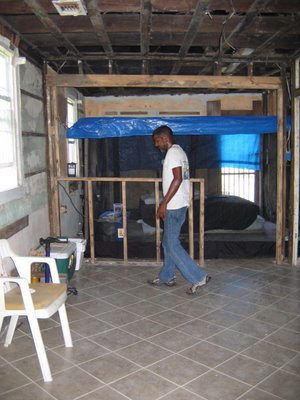 I was in a sculpture studio last Thursday, and a woman tells the story of a life-sized sculpture that she had made for her home in Waveland. It was to arrive from the foundry on the day the hurricane hit. She said that the sculpture was meant to be a proctectoress against storms for the coast. She started sobbing, saying it was just a day late-it didn't get there in time. It was immediately clear how much emotion she had put into the piece before the storm and how she now has given it special significance since it hit. Her home, of course, was obliterated. The statue is now, finally, standing on the porch of her home in Mid-City --which flooded to the gills and which took forever to get back to. I mean, this woman was sobbing. And I could tell she felt embarassed for it.

One cannot just go through life and ignore what's going on, no matter one's priviledged status (like mine -I live on the alluvial plane. My roof was blown off, but we raced back to town and replaced it before the rush. Others are just now getting construction crews to BEGIN. See Slimbolala).

People everywhere are uncapped and oozing all over. Still.

Well, I am leaving for the holidays tomorrow and will not be posting until the next Ruthie-Monday. I will leave you all with a cheerful series of photos. A secondline popped up on my block the other day. That's the best. 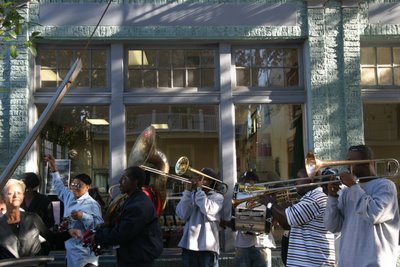 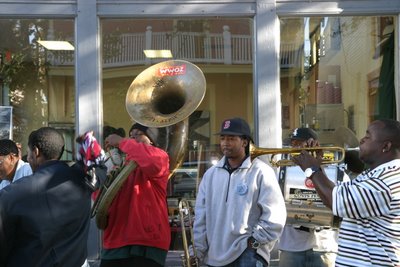 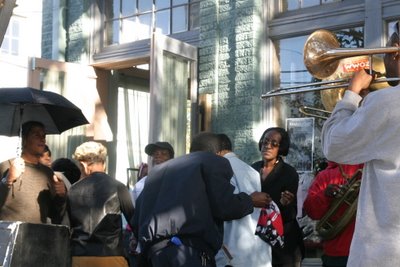 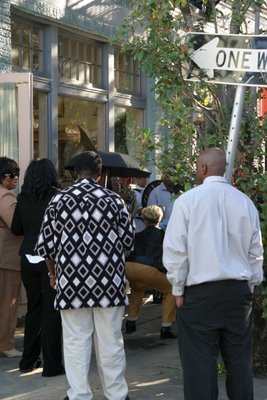