Yesterday, when I went to put the dogs out first thing in the morning, I saw this: 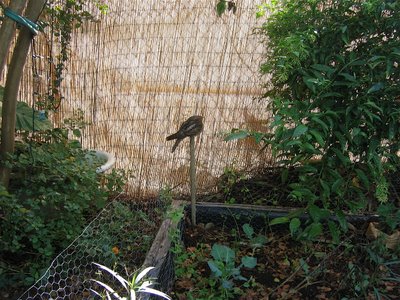 The bird did not stir when the three dogs rushed out the door. I shood them in immediately and went upstairs to get my glasses and grabbed my camera. When I returned, the bird had not moved. It looked dead, as though it had somehow been impaled on the fence post to my veggie garden.

I took a few more photos: 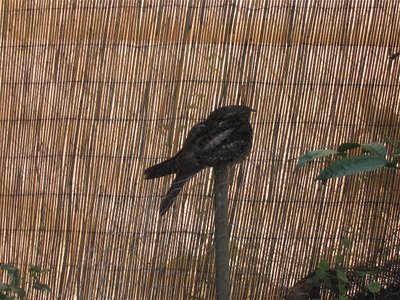 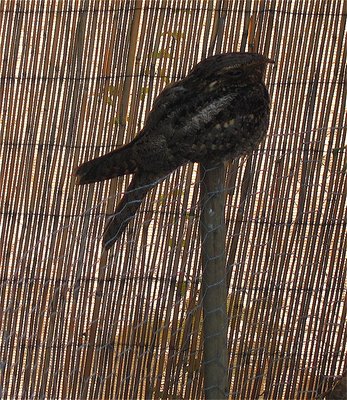 I crept closer. Its eyes were half-closed, and it was all squished in on itself. The flatness of its head struck me. I could tell that the bird was at least as big as my cat when stretched out. As I crept closer (mostly because I really was not eager to see the specifics of an impaled bird), it suddenly flew up and turned into the big bird I thought it might be. I let out a gruff little scream. It flew to a nearby tree.

It was a hawk. A hawk in my very urban back yard (close to the highway, close to St. Charles and a loud dairy factory). Now, I was raised with Native American beliefs; it would be said that the hawk could be my spirit animal and that it was there to say something to me. And so there is no question: this bird is an omen. With those deep-rooted thoughts in my mind, I was unnerved in addition to the elation I felt after I got over the startled feeling.

Well Ma, what do you think? Have I outgrown the spirit animal you gave me whenI was a kid?
Posted by NolaNik at 9:23 AM 5 comments: