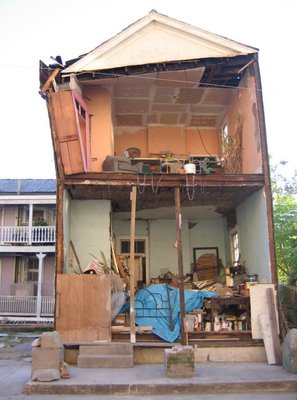 taken early November, 2005
This is the closest faceless house to mine. I have been keeping tabs on it. The thing is right in the middle of busy, busy non-flooded New Orleans. The neighborhood has been dealt terrible architectural blows this year with the collapse of mansion-sized buildings along with the burning of the Coliseum and the very, very old Baptist church on Camp Street.
Two weeks ago, I saw what appeared to be a meeting between a contractor/engineer type person and a very old man. They were standing in front of the house, on Erato. I thought, "Oh good, they will save it." There is a nice house under that asbestos siding.

Well, a few days ago, the front part of the roof, once seemingly supported by a Tupperware storage container, fell onto the sidewalk. 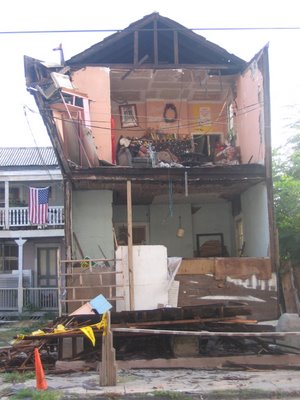 taken yesterday, July 24, 2006
Very sad. Maybe the man who owns it is just to old to deal? Maybe the old man lives there and was curious as to whether or not the owner would ever fix it?

There are four active mailboxes on this this house, by the way. I have seen the mailman deliver and evidence of life within. That is even more sad.


UPDATE: I was trying to get the pictures to upload all day. I wrote the text this morning and this afternoon I saw the elderly man standing across the street from the building, embracing himself, staring at the building very sadly. 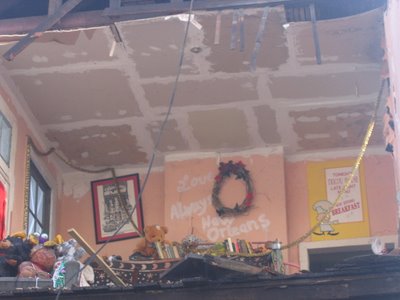 Posted by NolaNik at 11:16 AM No comments: Links to this post